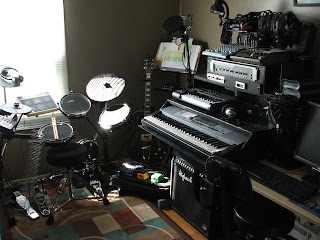 For a few years now, maybe more, I've had this feeling building inside me. That something in my life was wrong, very wrong. I was not living the life I needed to.
The thought that I had too much began crossing my mind about 6 or 7 years ago. By most peoples standards I didn't really have anything. I hadn't owned furniture other than a bed and a desk at the time, but I did have a lot of alternative possessions. I built up a home recording studio component by component over 2 decades, eventually amassing nearly $15 000 in instruments and electronics. I built up a home gym large enough to rival that of a full scale fitness center. I had hundreds and hundreds of reference books, all of which I read  or used at some point. During my time as a sponsored skateboarder I collected numerous storage bins of clothing and shoes. As for sports equipment .. where do I begin? I love trying different sports and activities and in the end could have opened my own sporting goods store. A short list looks something like this; 2 mountain bikes (well one is a single speed, we all need one of those right?), downhill body armor, 1 road bike, 2 snowboards, plus gear, aggressive inlines, skateboards of every kind & spare parts to build 10 more, 2 sets of sparring equipment, 2 heavy bags, football, basketball, et cetera, et cetera. I even rented a storage unit for 6 months in 2010 to store the stuff I had no room for!
What did all this mean to me? Well I thought it meant everything. That's why it produced such daily anxiety in me. I mean at the time I didn't know where my anxiety came from, but in the back of my mind I was always worried about my stuff. Would someone steal it? A fire destroy it? The other thing I didn't give much thought to was the cost of repairs or replacement.  My beloved stuff was an anchor around my neck and I couldn't even see it. The great George Carlin once did a bit on "stuff" -  "A house is just a place to keep your stuff while you go out and get more stuff." I fell victim to a consumer society just like so many of us. The only difference was that instead of blindly buying whatever I was told by commercials, I searched out the things I created a need for in my mind. The dream I had of a home studio where all my friends would come to jam. The dream of my professional gym where I would one day train clients. With a lot of these dreams came the need for every possible gadget, add-on and component that I needed. It got a lot worse for me in 2009 when I took a position as food service manager for a large corporation. Within 2 years I had moved up in the company and was earning enough to support 2 families and I had none. Just myself to indulge upon and I did. I bought custom guitars and a Pro Tools recording system. Hey what's $5000 to blow in a month, meh. I pissed money away on clothes, jewelry, watches, whatever I thought I had always wanted. I just didn't know that in the end I would wake up from this dream, which was quickly turning into a nightmare, only to realize I was more unhappy and stressed out than before I had money. 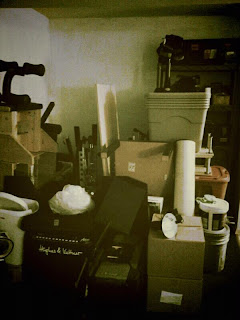 I moved to Hamilton In December to start a new life. Moving from a townhouse to a tiny one bedroom apartment would take some adjusting. I didn't know it yet, but this was really going to be a new life. A whole new kind of life. I couldn't take the thought of dragging these precious possessions any further through life with me and I reluctantly began to unload. I was only reluctant at first. In fact as I began selling what I could on Kijiji or giving away what I couldn't I felt more and more free. My anxiety began to lift and I found I worried less about everything. I sold Pro Tools, my drum kit and the custom guitars. I sold all my dvds, gave away clothes, shoes, and a huge portion of my books. I threw out trinkets, knick knacks, shelving, kitchen wares and appliances. I'm still working on it to this day. I discovered it's not as difficult as I thought to live without all these things, but it is a process. This isn't something you can do all at once. Bit by bit I see what I can live without and when I'm comfortable at each stage I get rid of a little more. The memory of when I toured as a pro skater keeps coming back to mind. For months I would live out of a large duffle bag while I traveled province to province and state to state. I always felt so free during those periods. Only what I had with me to make due and soon I would realize it was all I needed. So why when I came home did I suddenly need all this stuff again? I'm still working on that answer. Maybe I had a home that needed to be filled with more stuff? 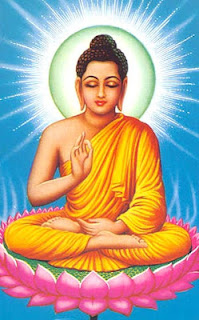 I began studying Buddhism in 2011. Actually I began studying philosophy of all backgrounds in 2011. Philosophy is what saved my life. I was able to go off the anti-anxiety meds my doctor had prescribed and truly began seeing the world in a different light. Seeing the world from many different opinions and view points allowed me to create my own beliefs. A lot of what I have learned up to this point I summed up in my post "The Good Life?" It lead me to seek out a happier, less stressful life and to quit my career as a corporate goon. I developed an affinity for the philosophy of Buddhism. This for me was very distinct from the religion of Theravada Buddhism that is practiced so widely today. Three of the four basic Buddhism concepts, called the noble truths are as follows; life is suffering, all suffering is caused by desires, suffering can be overcome and happiness attained by letting go of desires. The fourth talks about the path to take to accomplish this. If you want to learn more you'll have to research it on your own, my point was to show how I learned that my anxiety was stemming from my desires. Most of which I realized were completely unfounded. The ancient Greek philosopher Epicurus said "pleasure is the greatest good, but the way to attain such pleasure is to live modestly and to gain knowledge of the workings of the world and the limits of one's desires." Epicurus didn't say having wealth was inherently bad, just that it certainly wasn't needed for true happiness.  If anything has driven this point home to me it has been witnessing the lives of the rich as my new career has lead me directly into their homes. Working as a finish carpenter on enormous custom house has me privy to how the wealthy spend their money. How many cars, home theaters, walk-in closets and marble bathrooms do we need to be happy?

All of this process brought me to where I am today. Working towards and doing my best to become and live as a minimalist. To me a minimalist keeps only what they need to survive and be happy. Does this mean that I'll soon be penniless and living in a cardboard box? No, not at all. It's a stripped down life. Where giant houses and material things aren't necessary for happiness.  I still have my 3 bikes, gym and sports equipment. I did keep one electric and one acoustic guitar, but these are things I use daily and help create happiness for me. I have whittled my possessions to the things I use daily. I have adopted a vegetarian diet which to me is the basics for nutrition and health. It's also a lot easier on the budget, another of the concepts in my life that is being simplified. I don't want to be broke in a ditch, but I also don't want to spend frivolously. Living minimally will make you think twice before you spend and bring more stuff home. I ask myself the question all the time now, "do I need this to be happy?" or "is this something I'm going to use to make my life better?" If not, it probably has no place in my life.

For now I have everything I need. A cozy place to live and keep the things I use to lead a happy life. I'm a partner in a wonderful loving relationship, I enjoy an active, healthy lifestyle and I have means to get around when I want to go some place. There's a wonderful documentary on minimalist living called "We the Tiny House People". It's about living is smaller spaces and the types of people that do. It tries to answer the question of how much do we need in life to be happy. Entrepreneur and treehugger.com founder Graham Hill states "Editing is the skill of the century. Cutting back on space, cutting back on possessions, cutting back on media, cutting back on friends. You have to refine because it gives you a lot of mental clarity, a lot more space, a lot of flexibility and it's also really good financially." I think he's onto something.
Posted by Unknown at 03:56