So it's been barely a week since I began to recover from the super-flu that I feared at some points was going to kill me. I can't remember ever being so ill before. By the time I was feeling better on Monday and began eating again I had already dwindled to 139 lbs. Through bone breadth testing I know I have a very small frame for a guy, but at 6' tall this is still too low in my weight range. Wait what's this? You haven't heard of bone breadth testing? Let me explain a little. Your bone breadth is a measurement typically taken at the wrist or elbow that with the use of a chart, gives you a better idea of your ideal weight. It  may sound strange, but someone can actually be "big boned"

To give you the idea I have a wrist measurement of 6 1/2" which is the chart says is small for a guy and should therefore weigh between 149-160 lbs. I usually weigh-in around 150 lbs at 5% body fat and rarely change from that. It's now Sunday and I've managed to "beef up" to 144 lbs and 3% total body fat. We're talking Bruce Lee territory now. At this point the fat in my body is basically my brain and what's left of the visceral fat which hold the internal organs in place. It's very difficult for me to gain weight and now that I have resumed some physical activities this week it's going to be even tougher. I'm on the classic see-food diet now. I see food, I eat it.

Monday was spent in bed, holding down food and sleeping. Most of the symptoms had dissipated, but I was still feeling weak.

Tuesday was a beautiful Spring day and also my birthday. I couldn't stay inside and I had a bit of energy. Chris was off work sick and came with me to Smokey Hollow Conservation Area. I had insisted on at least attempting a trail run and getting some fresh air. Chris vegged on a rock in the sun as I headed down into the valley with my Go Pro strapped to my head in hopes of getting some great trail running footage. The first 2km I felt amazing, my heart rate was pretty high, but I was flying. Around the 2km mark I almost instantly ran out of gas. I turned around and lightly jogged back, struggling to get back up the steep hill and out of the gorge area. You can see the little video I put together from the days run here:


By Wednesday I was slowly regaining energy. It called for rain so I headed out at 7am for a run. Approximately 2km from my house there is a Bruce side trail the heads down from a set of stairs I usually climb into Sam Lawrence Park. I put on my New Balance trail runners and figured I would check it out. After a short run through the city I descended into the trail system. Wow. I had passed this trail head several times in runs and couldn't believe what I had been missing. A beautiful and technical trail system right smack in the middle of Hamilton! I made 2km along the trails with no end in sight but I didn't want to push it knowing I still had the 2km of city to run back through to get home. I doubled the previous days performance for a total of 8kms of trail and road. Back home to eat and rest. 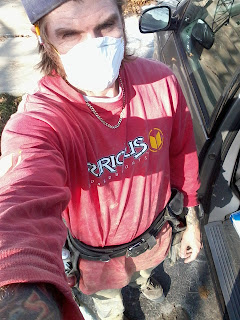 You may be wondering by this point where my long work day seems to have gone. This week also marked an amazing turn of events for me. I have ranted here several times concerning my 12 hour work days, but hadn't really gone into much detail about my job. Well it was difficult to say the least. I worked with a very serious gentleman whom I had never even seen crack as much as a smirk in two years together. He's a heavy smoker and I was second hand smoking a pack a day. I also enjoyed dealing with MDF dust. It's a peculiarly horrible wood product made from glue and sawdust pressed together into a sheet of plywood. The dust from cutting it is incredibly fine and gets through every possible gap in your dust mask. I would blow brown boogers from my nose all night after working with it and we worked with it often. I enjoyed the work and the pride of building things, but many of our days spent trimming houses involved back breaking baseboard installations or risky work on scaffolding. The last few months together things had changed for the worse. My boss was constantly angry or in a bad mood and taking his stress out on me. On more than a few occasions he had temper tantrums so bad he would throw tools or smash holes in the walls. I couldn't stay in that environment any longer. I've never been the kind of person who can stay in a situation I'm not happy in. It may sound unrealistic but I believe strongly that life is about finding happiness. Some people think it's crazy to leave stability in search of something better. I think it's crazy to live unfulfilled just because you may be afraid of the unknown. I wanted something I could put my passion behind and strangely enough I found it. I was interviewed last week and got the good news over the weekend that I was hired as a front-line staff member at a large outdoors store. I would be assisting people in their search to fulfill their passions for living life outdoors and also helping with the natural running clinics. A perfect fit for me. For now it's a seasonal contract to be reviewed at the end of the summer. It's a risk, but one I'm prepared for mentally and financially.  Sometimes you have to take chances in life and although it's not the kind of pay or hours I would like, I see this as my chance to get a foot in the door and prove my value.

Thursday and I was finally back in the pool. I was feeling the strain of recovering from illness with the small amount of training I had been doing so I kept it light and cruised out 1500m worth of laps.

Friday afternoon was spent watching Chris add some new ink to her completely amazing sleeve. I love seeing it unfold into a true work of art on her arm. Just when I thought she couldn't be any fuckin' sexier! I headed straight from there to Mount Nemo to push a longer trail run. I left the beaten path and took the Bruce Trail from the conservation area. It just occured to me that some of you may not know of the Bruce Trail so here is a quick blurb from wiki:


"The trail follows the edge of the Niagara Escarpment, one of the thirteen UNESCO WorldBiosphere Reserves in Canada, for almost 900 km (560 mi). The land the trail traverses is owned by the Government of Ontario, private landowners and the Bruce Trail Conservancy (BTC). 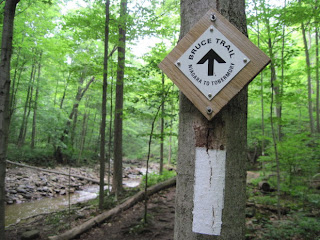 The trail begins in the Niagara Peninsula of Southern Ontario in Queenston, Ontario, on the Niagara River, not far from Niagara Falls. The cairn marking its southern terminus is in a parking lot, about 160 metres (520 ft) from General Brock's Monument on the easterly side of the monument's park grounds. Its northern terminus is in Tobermory, the jumping off point for Fathom Five National Marine Park."


The trails are amazing and we are lucky to have such a fantastic trail system traversing through our area. The terrain contains everything from gravel paths to some of the most technical hiking and running imaginable. It includes streams, waterfalls and spectacular cliff views overlooking cites and farmlands. Most of the trail running adventures I describe are on either the main trail or one of the hundreds of side trails that weave through it.

Seems as though I took a bit of a side trail from my story, I'll get back on track now. The run at Nemo was just what I needed to restore my confidence. It was super technical with lots of ups, downs, roots and rocks. I started to fatigue around the 9km point and began to get sloppy. This kind of terrain can wear you down quickly. I got lazy and let one of my feet drag and it caught a root. The other foot was too slow to get in front and before I knew I was crashing face first into a jumble of roots and rocks. I managed to get my forearm out in front at the last second and ended up smashing it and the side of my body into the jagged mess. At least I saved my face. It was my first fall and I was totally stunned. I laid there for a few moments groaning. This was worse than a lot of my skateboard slams from over the years. I pulled myself together and managed to run the rest of the way out of the trails. I would feel that in the morning.


Now Saturday morning and I was feeling it. I had spent the night icing my arm and an inflamed Achilles tendon. Both were feeling well enough for activity and they had too. Chris had a birthday surprise for me and was taking me to  Joyride 150. An indoor bike park in Toronto complete with wooden BMX tracks, dirt jumps and an indoor cross-country mountain bike course. We had the time of our lives and rode for a solid 2 hours. It felt great to jump my bike again. A couple years ago I had gotten back into dirt jumping and it was always something I loved. The feeling of flying through the air on my bike is second only to the feeling of flying around on my skateboard. There's a freedom in it few people get to enjoy. I was grateful for the chance to have that experience again. Great day with my best friend. Now to rest up and do it all over again this week!
Posted by Unknown at 18:26