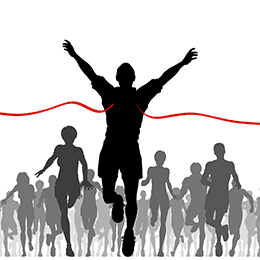 Ok I know this is my first year in racing, so I may have gone a little overboard. I have to say though that anyone who knows me will testify to this character attribute, so why would it be any different now!

I have already registered for a number of these races and will mark the tentative ones with an asterisk (*). The only reason I haven't registered for these are because the registration hasn't opened yet, but I'll be first inline, online when they do.

So here it is. An ambitious first year in Racing. I really wanted a good mix of races. Quite a few 5km running and sprint distance Tri's which is where I want to be. I really don't have a drive for distance or endurance yet, it's more about speed and power right now. I want to be more like a drag race than a Daytona 500. I have 3 half marathons spaced throughout the season. I still feel like I can work up to a decent speed over 21.1km. The idea for Around the Bay 30km was started back when I met Christine, as it was something we could do together. We began the training, but she quickly realized cycling was where she needed to focus her attention and decided not to run. Since I started training for it and it's what has motivated me to the point of half marathon distance I'm going to see it through.

Eighteen races is the total (I'm not counting Tough Mudder as a race), commencing February and coming to completion in December. It's almost 2 per month.

Here goes nothin' as they say...

Wow now that I see it all written out like that it does seem a little crazy. All I can do is train hard and give it my best on race day. I will be posting outcomes on my blog as they happen.