The Story of My First Triathlon

It feels like forever since I have written a blog post. There are a few reasons for my absence. First were a couple of incidents a little while ago that made it painfully obvious to me what I should have already realized, when you put your life out on the internet it is for everyone to see. Everyone and anyone. They also may not like what you have to say and have the equal right to give you their opinion. I suppose I naively thought that every response would always be what I wanted to hear. I have my big boy pants on now and am prepared for all responses and comments. I also found that I was becoming a slave to what I had started. I felt this need to "blog" even if I didn't really have anything good to share. This all began as a way to track my weekly progress as an athlete in transition from one sport to another. Now that I really think about it, it's also my transition into a different person as I step into this new lifestyle. I found my life was becoming too "training" focused because of my need to have a good report card at the end of the week. So at this point I have taken two steps back and one forward to begin to blog again. This time I'll write when I have something I want to say or in this case a great achievement to talk about.

Saturday June 15, 2013 was the culmination of 10 months of hard work. My first triathlon, a sprint distance of 750m swim, 20km bike race and 5km run. It began in August 2012 after a month of depressing over poor skateboard contest results left me in limbo as to my athletic life. I NEED to be progressing in a sport to feel satisfied and I had stopped true and meaningful progression in skating. That's when I was suddenly struck by inspiration while watching the triathlon in the summer Olympics. Actually all of the athletes and events inspired me, but it was the older athletes and especially the story of cross-country skier turned cyclist Tara Whitten. The thought that after a successful career in skateboarding I could take a left turn in life and begin again at 38 in another sport had never occurred to me. I also had never thought of the longevity of endurance sports or known about age grouping which puts you into direct competition against people of your own age. 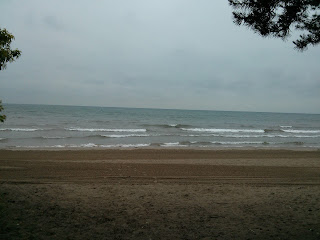 I began feeling the anxiety of the race around mid-week. My new job and schedule had me juggling training for the last couple weeks. I had pushed aside pool time for running to prepare for the Moon in June 10km race the previous Saturday, June 8th. It was worth it as I shattered my personal best coming in 21st overall, 5th in my age group with a time of 43:46! Fantastic, but there I was three days before my first triathlon with no swim workouts for two weeks. Yikes! As the panic set in I forced myself Thursday morning to go for my first open water swim. Beachway Park on the edge of Lake Ontario in Burlington had been cleared for swimming and the water temps looked good. Only one problem, rain, wind and 3-4 foot waves. I had no choice, I was out of time and needed open water swimming before the race. I managed about 400m in 15 minutes while getting rolled, tossed and smashed with waves. There wasn't a single person on the beach either so it was one of the dumbest things I could have done. Any of those waves could have caught me off guard, filled my lungs with water while trying to breath and swept me under. Desperate times call for desperate measures. That night I went to the pool and cranked out 1000m in 21 minutes. Amazing what anxiety can do for your training.

So back to the triathlon... 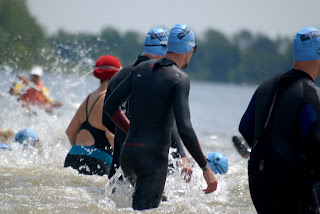 Guelph Lake was the destination for Christine and I. I spent the morning meticulously packing and going over race course maps and rules. We arrived with about an hour until race time which turns out is just enough time to get your race kit, pee, rack your bike and get into your wet-suit  I got down to the lake with enough time to warm-up with a couple hundred meter swim. I had met a few guys in my age group that were also making their first attempt at triathlon and we nervously chatted about how far out in the lake the turn around buoys looked. Not for long though as the horn sounded and our wave was off into the washing machine of kicking legs and flailing arms. You can see it and imagine it all you want but until you are in the mash of bodies trying to stay afloat you can't really know what it's like. I was ok until the turnaround point when I caught a glimpse of how far from shore we were. That's when the panic attack took hold. I felt like I couldn't breath, like my wetsuit got tighter and I forgot how to swim. Open water swimming is not like anything else. You can't stop or take a break if you're exhausted. 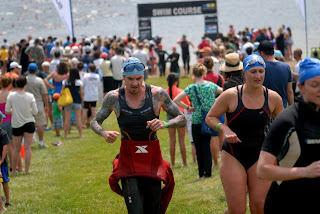 You have no choice but to swim. I rolled onto my back and backstroked for about 200m to catch my breath and regain my composure. With about 200m to go before I hit shore I was able to roll over and swim hard to the beach. As I came out of the water I couldn't even begin to run up the grassy hill to the transition area. I was spent already, feeling nauseous and was reduced to shuffling up the hill while slowly stripping off my wetsuit. Chris was there to cheer me on, but could tell I wasn't looking so well already. 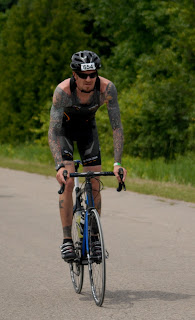 By the time I reached the transition area I had made it to a slow jog and was beginning to recover. It took me three precious minutes in transition to get out of my wetsuit and into my cycling gear. I was still in a bit of a daze as I ran out of transition with my bike, performed a flying squirrel leap onto the seat, clipped in and sped off as fast as I could. for the first 5km I sipped Gatorade and fought throwing up. I was still passing people, but it wasn't until the 10km halfway point when I began to feel alive again. Now I was passing people one after another. There was everything from mountain bikes to beach cruisers to time trial bikes flying along the road. The unfortunate passing in May of my Grandmother Alice had left me with a small inheritance and the ability to purchase a new carbon-fiber road bike. I had decided it fitting to name it after her. Alice and I made good time on the course coming in just over 38 minutes.

Transition two (T2), was considerably better and I racked 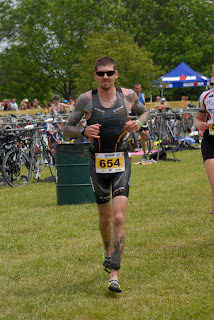 my biked, then removed my helmet - if done the other way around it's a disqualification. I put on my Vibram Five Fingers and ran out the other side. I didn't see another athlete the entire day racing in Five Fingers so I actually felt like I was representing the minimalist running community in a way and wasn't going to let them down. The first kilometre was a little tough. With legs tired from cycling I was slower than usual, but began to seriously overtake runners on the second km. Running is my forté and I knew this is where I had to make up time. I had just settled into a good pace when 30 seconds before the turnaround one of the first-timers I met waved to me as he was on his way back. "No fucking way this guy is going to beat me!" I decided to go for broke and began hammering out the last 2.5km. I was passing runners like they were standing still, scanning the field for my target. I was going to run that guy down or die trying. Before the last km marker came up I blew passed him with a "Hey man!" leaving a bewildered look on his face. I clicked off runner after runner until the finish chute when one of the last guys I passed decided to return the favour and blasted past me at the last second. I gave him a pat on the back and a big smile at the finish line, "Well played dude". I had brought my placing up considerably on the run and was completely satisfied with my performance overall. 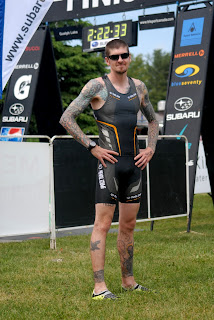 All in all it was a great experience. I'm looking forward to the two other triathlons I have entered this season. I clearly need to get out into open water a lot before my next attempt. I'll have to work on controlling my anxiety in the swim and my ability to get running right out of the water. I'll have to be faster and more organized in the transitions and hammer it a bit harder on the bike. This was really the purpose of my day though. I wasn't so much racing as learning. I have tried to stay in the mindset that my entire first season is about learning, discovering my weaknesses so that I can work on them and generally just enjoying the experience. It's definitely a day that will stay with me for a lifetime and without Christine there at every checkpoint cheering me on it would have meant nothing.
Posted by Unknown at 04:24