It's now actually Thursday morning and it's the first chance I've had to sit down and get some thoughts out about last week. I began my new position with an outdoors retailer this past weekend and what a change of pace. I can't stress enough how awesome it is to be around like-minded people all day, discussing all the things I am passionate about. The fact that I'm being trained by the company on all the awesome gear and have the opportunity to learn from my peers is just the icing on the cake. I really feel like this is the road I should be travelling down. It's not going to be easy peasy though. It is only part-time hours for now and just a 3 month contract. Whether or not I still have a job come September will depend on my performance over the next few months and the company's staffing needs. I have a safety net in the bank to get me through for quite a while, but it will have to turn into something full-time within a year or I will have to make some more decisions come next spring.

So now to last week.

Monday I was in Brantford to pick up my tools and final paycheck from my old boss. I decided since I was there I would hit their recreational trail along the Waterfront. Just like everything else in Brantford, don't bother. It eventually winds through some of the farmland and is pretty peaceful, but not worth the drive. I really wasn't feeling like a run so I was pretty content with the fact that I pushed out a 7km in just over 32 minutes. 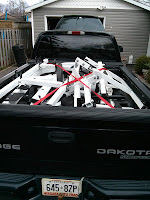 Tuesday I spent the day loading up my entire home gym from storage at my parents and dragging it home in the truck. In keeping with my minimalist lifestyle a huge multi-gym, calf machine, roman chair and free-standing chin-up station all went up for sale on Kijiji. I have my basic bench press station with attachments for the bench plus all my free weights here at home which is all I really need. The rest has been or is about to be sold bringing in around $1100! I made one rule when I began selling off my belongings. The money is to fund fun. By this I mean gear. Now this may seem counter-intuitive, but I'm a minimalist in that I don't want stuff just for the sake of having stuff. I have consistently said that if it has a purpose and gets used regularly it's something I'll make room for. Gear for sports and activities will always be used regularly by Chris and I. To us this is really what life is about. This round is getting all my camping and climbing gear. Oh wait I didn't mention I am becoming a climber? Just wait...

Wednesday I spent the morning cycling to my new job location and back to see the route and what kind of time I would be dealing with. Just one of the awesome perks to my new job is the ability to commute by bike. It's 14.5km and I currently make it in about 35 minutes. This is going to be great for me to get extra time in the saddle before triathlon season. Plus I'll be working mostly in the cycling department and this is a good chance to "keep it real". The afternoon was spent studying gear to prepare for the weeks training. That evening I went climbing at an indoor climbing gym in Burlington called Climbers Rock. I tried climbing back in the 1990's and fell back in love with it instantly. I went into a lot more detail in a post I did last week called "WTF Am I"

Thursday morning I headed out to Turning Skatepark in Hamilton. It was weird to get back on my board and it unfortunately felt very alien under my feet. After about an hour I was beginning to feel comfy again and then it all unraveled  I tried a standard ramp maneuver for me, a backside disaster revert and the next thing I know I'm smashing hard onto my ass. What shouldn't have been a bad slam actually destroyed me. I must have hit just the right way because within minutes my left glute had seized and I was done for the day. 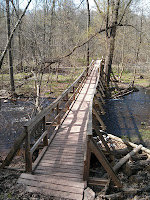 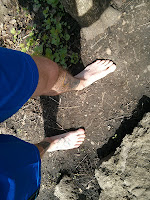 Friday morning I headed down to Smokey Hollow along the Bruce trail. I got out of my truck and realized I had forgotten my Garmin watch and MP3 player. Fuck! I wasn't heading back home so I started out for my run. Strangest thing, I was actually enjoying the silence. The sounds of the water in the stream and the birds were actually soothing. It had been so long without listening to music on a run I hadn't considered how nice it might be just to have silence  Running without the ability to track my pace was incredible too. I had a GPS tracker on my phone so I could see my distance at least. It is intensely hilly throughout this area and it wasn't too long before the pain in the side of my knee began to be relayed to my brain. I'm beginning to think it's from the pounding on the downhills. I'm going to try some flat road runs this week and see if the pain appears then. I made it 10km over about an hour and a bit. I was getting some "hot spots" in my toes from my Vibrams so upon returning to the truck I took them off and gingerly ran another 2km of trails barefoot. The sensations were awesome. The feel of the cool soft mud and leaves was like nothing I ever experienced. I certainly see the attraction of barefoot running more and more.

Friday afternoon I sadly had to attend the funeral for a friend of Christines. It was strange being at a funeral for such a well-liked and respected individual and never having met the man myself. I could tell his life influence many though. He was an avid outdoors-man and after the service to celebrate his life, 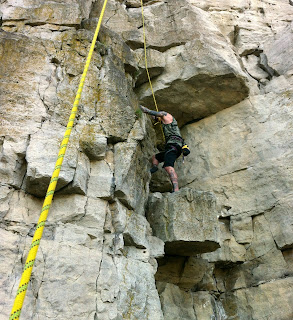 Chris surprised me by taking me out to Rattlesnake point for my first real rock climbing experience. I have to admit I was more than a little scared. I had been quite a pest since our jaunt to the climbing gym in terms of getting her to take me out for a "real" rock climbing experience. Then she called me on it. Did I mention I'm terrified of heights? I have such a deep trust in her though that the thought that something could go wrong never crossed my mind. We lugged the gear down to the cliff, picked a route and Chris setup the ropes. I love seeing her experience at work and I'm constantly in awe of her skills. I went down to wait as she repelled down to meet me. Now it was finally the moment of truth. I had no climbing shoes so I was using my Merrell Barefoots. I gingerly began the ascent. I did pretty good until halfway up the face where I was completely stumped by a smooth rock face. After a few attempts Chris lowered me down and proceeded to show me how it's done. Her experience showed as she used her climbing shoes and a lot of techniques I still needed to learn to climb right to the top. I gave it one more really good try, but with the same result of being stumped. 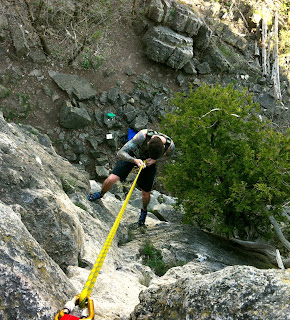 Before we left I asked if I could give repelling a try. We climbed the stairs to the top and with every step I could feel my heart pounding faster and faster. What the hell did I just get myself into? Chris set up my harness with the repelling device and I began to swing out over the edge. I was shaking and absolutely terrified! After about 30 seconds the anger in my own cowardice took over and I yelled "get yourself together Brown!", then began to drop over the edge. By the time I reached the halfway point I was already relaxing and enjoying the ride. In fact when I hit the bottom I ran back up for one more try, descending even faster on my second attempt. Climbing, count me in!

The weekend was the start of my training at the store so no sports for me. It's a worthwhile trade off though for the chance to start a better, happier part of my life.
Posted by Unknown at 04:18