Another set of race results and this time my very first half marathon! As usual though we need to start at the beginning.

Monday nights I'm back to training double duty. I wanted to add a 3rd day of running and the only place it really fit was there. Unfortunately it's also still my core and weight training night so It's a bit of a long workout for the start of the week. I'm looking to do speed training on Mondays, pace and cadence on Wednesdays with Saturdays allocated for my long runs. I set out for a 6km whatever run. I suppose something like fartleks. Those are basically random bursts of sprinting throughout your run. Sort of like interval training, but not as structured. I set out at a good pace and headed anywhere. Before I knew it I was at the base of the Dundurn stairs. These stairs scale the escarpment to the tune of almost 350 steps. Many locals go there year round for stair training. I decided a stair sprint was in order and blasted up them in under a couple minutes. Good idea, bad idea. My heart rate was near ventricle bursting and I had to drop to my knees when I reached the top. I ran up the street a little to recover and then a fast flinging foot fandango down the stairs and back to the bottom to continue sprinting the 2km back to the cabin in the city. Needless to say, the core and weight training was a struggle and left me with a pounding headache. I'll reiterate the old adage, "no pain, no gain"

Tuesday was a needed night off. With a winter storm looming over Southern Ontario again the boss said "Don't even bother yourself to wake up tomorrow". So I didn't.

﻿﻿
Wednesday morning came, but brought no storm with it. Freebie day. Spent the day editing video footage from the last two years. It was a total slushfest outside. it looked like a slurpee machine went berserk and flooded Hamilton with an unflavoured version of the brain-freeze inducing goop. I couldn't run in those conditions so I followed my girl Chris to Goodlife Fitness to run on the hamster wheel, um I mean treadmill. I thought "hey I should run in my Vibram Five Fingers!" Their basically a toe sock with a thin rubber sole to give you the feel of running barefoot. Good idea, bad idea. I wanted to make 16km on the 'ol stationary running device in preparation for this weekends half marathon, but at 13km the burning pain in my big toes was too much. Luckily for me it was only giant water blisters which kept me walking on the sides of my feet. Fuck. Lesson learned. Don't try anything new the week before a race. In order for me to get a free ride on the running belt that night I had to sit through the "Goodlife" spiel about how great the prices for the gym were and how I had but one day to reap the benefits of their "ends tomorrow" promo. Finally free, I was on my way to Dr. Browns' home surgery clinic to pop those delightful blisters.

Thursday night I was back in the pool, this time with my friend Steph who has also decided to take on the challenge of triathlon this year. She just had to one up me though and has decided to go the full Olympic distance. After seeing her bust out 1000m on her first night in the pool I have no doubt she'll make it too. As for myself, my coach has me working on keeping my head down and body flat in the water. This requires a lot more kicking action and although my lap times are coming down the heart rate and breathing are going up. My swimming still needs a lot of work before my first race in June, but there's still time for that.

Friday and Saturday were filled with the usual errands and a few unusual ones too. After both my phone and laptop crapped out - no doubt in an electronic co-conspiracy against me - I had to go shopping for both on a budget I didn't have. Thanks to my sugar momma Chris for helping with the laptop. I'm not sure she really knows how often she saves my ass. At least I haven't asked her to shave my ass yet. But I digress.


Chilly Half Marathon, Burlington, ON﻿ 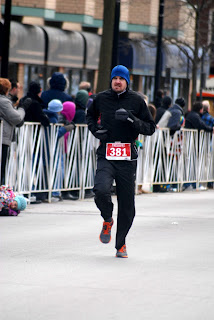 So today was the big day. They say it's only your first time once, so I did my best to soak in and savour every moment today. The atmosphere at the start and throughout the race was amazing, as was the windchill. My support team of one, Christine was there camera in hand, bag of my gear on her back. Still not sure what I'd do without her. I had never run 21.1km without stopping or in under 2 hours before so I randomly decided my first time would be today. I packed into the corral with the rest of the sub 2 hour hopefuls and waited for the horn. I heard nothing, but all of a sudden everyone was running so I followed suit. Next began 21.1km of adjusting my pace and passing runner after runner after runner... Around the 5km mark I aborted my Garmin watch and it's never ending data stream to run completely on "feel". That's when the race finally began for me. I would simply pick out someone ahead that I felt for whatever reason wasn't as good of a runner as I was, then run them down and blow past them. I wanted to demoralise them a little. To me every other runner is the enemy. I don't mean that in a violent or mean way, but in order to be competitive and place better I have to beat them. Finally I found two worthy opponents. Two young guys weaving their way through the field. It was around the 12km mark and I decided no matter what it took from me I was finishing with them. I could feel my calves screaming as I increased pace over and over to stay with them. at 18km they made their move and really put some fire in the furnace. I stayed just behind the weaker of the two, stride for stride. At 20km I thought this is ridiculous I am faster than this guy and began sprinting to catch the other. I was on his heels within 500m of the finish and decided I still had about 2 minutes to put a hurt on everyone left in front of me. My pace was now under 4:30km/min and I managed to pick off 4 or 5 more runners before crossing the finish line in 1:48:06. Almost 20 minutes off my personal best. I had my hands in the air like I had just won the whole thing. I didn't care who was looking. I was hurting head to toe and smiling ear to ear. I can't wait to do it all over again.