I always find it interesting to see who or what inspires people. I'm sure like other athletes I get a lot of my inspiration from my own internal drive, but we all have someone who inspires us. There are always those amazing people with unbelievable stories that show us anything is possible with determination and the right mindset.


Who are my heros? I'm glad you asked! 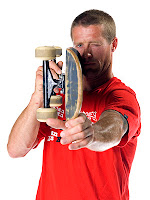 A professional skateboarder and all around amazing athlete. He's been pro and I've been watching him since we were about 14 (we almost share a birthday and are the same age). Here is just a short list of amazing accomplishments from Danny. (Borrowed from Wikipedia)


Back in the 1990's Danny Way was a a mutli-sport professional athlete. He rode for Circle A snowboards, Plan B skateboards, raced motocross and surfed. Danny also came back from a broken neck sustained while surfing, which put him completely out of sports for more than a year. This was just one of numerous injuries including a broken vertebrae and ankle, shoulder dislocation and 5 knee surgeries. The man is an unstoppable machine.

Author of "Finding Ultra" and endurance racing monster. He is a top contender in the Ultraman World Championships and the first vegan to compete in the event. In 2009 Men's Fitness Magazine placed him in the list of "The 25 fittest men in the world". Here is a short bio borrowed from his website:

"In May 2010, Rich and his ultra-colleague Jason Lester accomplished an unprecedented feat of staggering endurance many said was not possible. Something they call the EPIC5 CHALLENGE – a odyssey that entailed completing 5 ironman-distance triathlons on 5 islands of Hawaii in under a week. Commencing on Kauai, they travelled to Oahu, Molokai and Maui before finishing on the Big Island, following the course of the Ironman World Championships on the Kona coast.

In addition, Rich has been a top finisher at the 2008 and 2009 Ultraman World Championships in Hawaii. Considered by many to be one of world’s most daunting and grueling endurance races on the planet, Ultraman is a 3-day / 320 mile double-ironman distance triathlon that circumnavigates the entire Big Island.  Limited to only 35 carefully selected invitation-only participants from all over the world, Day 1 involves a 6.2 mile ocean swim immediately followed by a 90 mile cross-country cycling race.  Day 2 is a 170 mile cycling race.  And the event culminates on Day 3 with a 52 mile double marathon run on the searing hot lava fields of the Kona coast.

In his first time out after a 20-year respite from competitive sports and only 6 months of training, Richard clocked the 2nd fastest swim split, finished 11th overall and was the 3rd fastest American."
Rich, (along with Christine) inspired me to become vegetarian, to improve my diet and strive for better health. His book and story centers around his fall from a world class swimmer in college due to alcoholism and the successful rebuilding of his life into one of the best endurance athletes in the world. Truly inspirational! 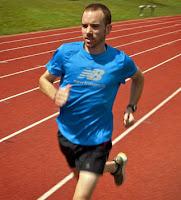 Local running hero Reid is from Hamilton, Ontario and is a Canadian 2012 Olympian. He competed for us in London in the Marathon placing 27th with a time of 2:16:29. I first heard of him from my friend Steph as he had won the 2012 Around The Bay race that I was entering. He ran 30km in only  1:33:20. Currently I'm hoping to make it in under 3 hours... His other race times blew me away and he quickly became the runner whose times and paces meant the most to me. Although I doubt I'll ever reach his times, for me they are the standards to be met.

This guy is really fast. He is also a skateboarder and grew up skating with a lot of the guys I know in Hamilton. He even set a skateboard mile record of 3:49. Now that's a record I'll be doing my best to break this summer. Not an official record of any kind, but for a fellow skateboarder and runner it'll be fun seeing what I can do against it.

IAn early 1990's multi Ironman Triathlon champion. He competed in the Ironman World Championships in Kona, Hawaii, from 1982 - 1995 and won 6 between 1989 - 1995. He also won the ITU World Championships in 1989. He was named Triathlete of the Year six times by Triathlete magazine, and in 1997 Outside magazine tabbed him The World's Fittest Man. I actually discovered him when I began watching the original Ironman World Championships which I was using to inspire me. I was completely amazed as he found a way to win year after year.  In 1995 he came back from a 13 minute deficit to the leader coming out of the swim.  He was nicknamed "The Grip" as no one could get free of it. Certainly one of the best triathletes ever. 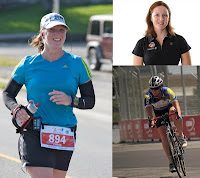 The only heroine to make my list. All around amazing individual, athlete, diabetes battler and thankfully my other half.  Where to begin? From the moment I met her she has continued to impress and amaze me. She is the most real and down to earth person I have ever met. Although she was diagnosed with Type 1 diabetes more than a decade ago, she continues to live strong and healthy. She has run half, as well as full marathons and now concentrates all her athletic efforts on becoming a great cyclist. She has traveled through Asia and experienced things I can only dream about. Chris has an amazing determination which I know has gotten her through so many tough times. Always open minded, she is willing to try new ideas, push her body and overcome so many of the obstacles life has thrown at her. I doubt that I could fair so well against a foe such as diabetes. I've told her many times, but she never takes me seriously. Maybe now she will realize that she truly is one of my heroes.

What can I even say about this guy to express how much of a hero he is to me. He's been my closest friend since we were about 13. We met in grade 8 at Dalewood Middle School because of skateboarder and he's been like a brother to me since. I couldn't even estimate the amount of awesome skate sessions we've had together. I also couldn't even come close to estimating the amount of trouble we've gotten into together. This guy has been there through thick and thin. What is truly amazing about Rob is his determination. In his twenties he was diagnosed with Macular Degeneration, in layman's terms, he was going blind. I'll let this except from wiki explain much better than I could.

"macular degenerationis a medical condition which usually affects older adults and results in a loss of vision in the center of the visual field (the macula) because of damage to the retina. It occurs in "dry" and "wet" forms. It is a major cause of blindness and visual impairment in older adults. Macular degeneration can make it difficult or impossible to read or recognize faces, although enough peripheral vision remains to allow other activities of daily life."

Rob not only began skateboarding again, but shreds a mini-ramp like nobody's business. He and his wife Wendy are also two of the best parents I have ever seen and in today's society that is no small feat. I can't wait until my next skate session with Ribber.
Posted by Unknown at 16:08