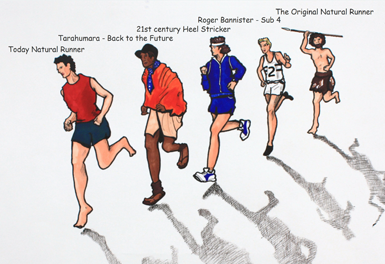 Lately Facebook, and I'm sure media of all forms, has been awash with the news story about Vibram Five Fingers shoes and how they "Lied" to us. They have conceded in the case of a lawsuit by Valerie Bezdek. She alleged that there is "no scientific support" for the claims of the health benefits made by Vibrams. They have stated that they:

Anyone who knows me knows that I am beyond a supporter of the minimalist movement, I live it. I spend 95% of my time in Vibrams Five Fingers (VFF) or barefoot and myself and many others believe these claims are true. This was certainly not always the way for me. As an ex-pro skateboarder I spent most of my life in thick, supportive-type skate shoes. When I decided to take up running seriously after my retirement from competitive skateboarding, I thought there must be techniques to learn. I mean who would think you can just take up a sport without learning and practicing some sort of technique? Well, millions of people. I'm going to be making my case for minimalist and barefoot running, as well as boldly stating my opinions for the first time. This WILL offend some people. It is not intended to, but at the same time this is something I am very passionate about, believe in strongly and most importantly, have done a LOT of research on. I know this topic well and it's time to get real about it.

My own experience has been an interesting journey. It hasn't been easy to transition to minimalist shoes and even more difficult to transition into VFF's. If you have been depending on a shoe (supportive & cushioned) to do the job of the tendons and musculature in your foot then don't be surprised when it "hurts" to walk around unsupported. Offensive statement #1, If you can't walk or run in bare feet or a minimalist shoe for your daily activities - You have weak feet. There may be 0.01% of the population that have a specific foot condition and need supportive footwear, but for the rest of us it's simply lazy, weakened feet. Supportive footwear and orthotics, YES orthotics only serve to make your feet weaker, thus creating a cycle of needing more cushioned and supportive footwear. Here is a link to a leading chiropractor, Dr. Gangemi, who understands the dangers of orthotics and explains why they are so terrible for you.  I am asked all the time how I can work 8 hours on a concrete floor or run 30km in VFF's. It's because I NOW have very strong feet. It wasn't always this way. During the 10 months it took me to transition to VFF's I had to deal with foot pain. The pads of my feet needed to thicken to provide natural cushioning, the musculature of my feet needed to strengthen greatly to provide support. This is not something you can do overnight or even in 10 weeks as the study that "debunked" Vibrams claims to scientifically support. You can read the study here: Foot Bone Marrow Edema after 10-week Transition to Minimalist Running Shoes If you don't want to take the time to read the study here is the abstract (Summary):

Foot Bone Marrow Edema after 10-week Transition to Minimalist Running Shoes
Abstract
Purpose: Minimalist running shoes are becoming a more popular choice for runners in the past few years. However, there is little conclusive evidence about the advantages or disadvantages of running in these shoes. While performance benefits may exist, injury may also occur from the added stress of running without the benefit of cushioning under the foot. Bone marrow edema can be a manifestation of added stress on the foot. This study measured bone marrow edema in runners' feet before and after a 10 week period of transitioning from traditional to minimalist running shoes.
Methods: Thirty-six experienced, recreational runners underwent MRIs before and after a 10 week period. Seventeen subjects were in the control group (ran in their traditional shoes only for 10 weeks), while the other 19 were in the experimental group (gradually transitioned to VibramFiveFinger running shoes over 10 weeks). The severity of the bone marrow edema was scored on a range of 0-4 (0 = no bone marrow edema, 3 = edema in more than 50% of the length of the bone). A score of 4 represented a stress fracture.
Results: Pre-training MRI scores were not statistically different between the groups. The post-training MRI scores showed that more subjects in the Vibram group (10 of 19) showed increases in bone marrow edema in at least one bone after the 10 weeks of running than in the control group (p = .009).
Conclusions: Runners interested in transitioning to minimalist running shoes, such as Vibram FiveFingers should transition very slowly and gradually in order to avoid potential stress injury in the foot.
(C)2013The American College of Sports Medicine


In my opinion the study is poorly done, lacks a large enough sample group and is missing the absolute key to minimalist running. That is: training someone in proper - TECHNIQUE! I will get to this momentarily...

The absolute proof for me was when I bought my first pair of VFF's and went for a walk with my wife Chris. She is always barefoot, I was never. When I first purchased VFF's I couldn't even walk 2km in my new "barefoot" style shoes. The alarm bells were ringing. If you can't walk around without the support of a shoe, shouldn't that tell us that something is incredibly wrong?? We have been on this planet a long, long time and most of it without footwear. The modern padded, supportive shoe is an abomination and a pariah. We have all been duped by the footwear industry and now that our feet are weak, we believe we need these shoes. The argument concerning this that I always receive is that we didn't have "man made" surfaces such as concrete or asphalt before. My rebuttal is that the body has an amazing ability to adapt. More than that ,it is the technique with which we walk or run that is our shock absorbing system. I spend all day walking and standing on concrete floors in VFF's. At first I didn't have the foot strength, but over time I developed it and surprisingly I also developed thicker pads in my feet. If you analyzed the foot of someone in a nation where they don't use footwear vs. someone who always uses a cushioned shoe, the difference would be astounding. Hard, thick calloused skin and a lot more natural padding. 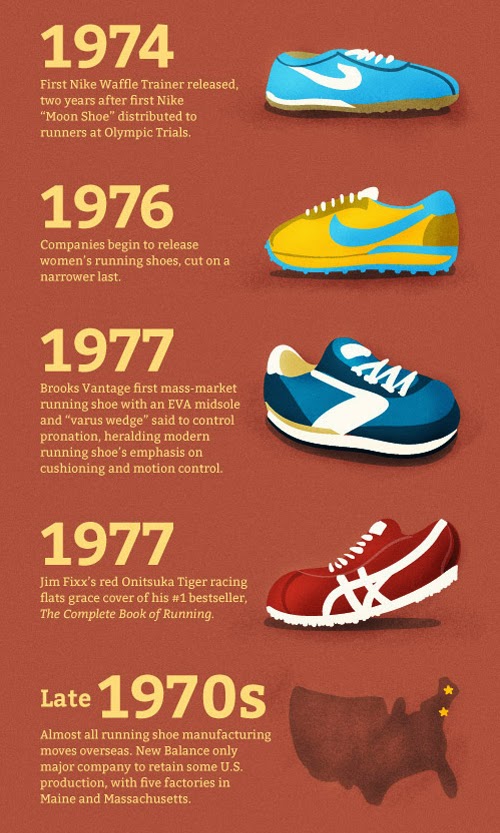 This brings me to my final point: Technique. This also brings me to offensive statement #2 and probably the bolder of the two. If you are a heal striker (landing on your heal first), you are not a runner. Yep I said it. Guess what though, it's not my opinion. Based on the scientific study done by Harvard: Biomechanics of Foot Strike, Dr. Daniel Lieberman has determined that landing heel first with a loading of more than 1 times your body weight is not only incorrect, but incredibly harmful. It is only the "modern" running shoe that allows this. I placed modern in quotations as they are often referred to as "traditional" running shoes which is incorrect. Prior to the 1970's when Bill Bowerman, co-founder of Nike developed the first "waffle trainer", all runners used a forefoot or midfoot strike and a thin soled shoe. Yes there is also a study on this: Running Before The Modern Running Shoe. The only people running at this time where trained athletes, using spikes on tracks or for cross country. In 1966 Bill Bowerman released the book "Jogging". This was the first time the "everyday" person considered running just for enjoyment and fitness. If you look at nature, animals that run change the shape of their movement according to the speed and forces they are generating. A Horse will walk, trot, canter and gallop. An unshod human will change the shape of their movement to walk, run or sprint. If you place a cushioned shoe on your foot you will interfere with the proprioceptive nerves in your feet and your brain will not know when to change shapes. Once again there are experts on this and you can watch Lee Saxby's lecture Barefoot Connections where he explains this in detail. If you had an engineer anylyze the human leg and determine how it should work to absorb shock they would find that it's designed to land forefoot first using the tendons and musculature as in the Brown University study: Tendons Absorb Shocks Muscles Won't Handle. A great visualization is to imagine jumping off a 1 meter platform. Would you rather land on the balls of your feet first or your heels? Enough said. Your body has no shock absorbing system to deal with landing heel first on an outstretched leg with your weight behind it. So what are you then? Well the movement of landing heel first has been deemed "Jogging". I stand behind this opinion and so do the experts on running technique. I'm not trying to downplay the amount of training, dedication or effort that joggers are putting forth, nor am I saying that they can't be fast or run longer distances. What I am saying that if you are Jogging (heal-striking), you have spent a lot of time thinking about training, and all the other aspects of a sport without any consideration to technique. I don't know why running is so different from any other sport. No one assumes you could just jump into a pool and start freestyle swimming with perfect stroke technique, but for some reason people think they can just throw on some shoes and whatever their form is - it must be fine. It's not. If you aren't working on technique you aren't taking running seriously and I really have no respect for what you are doing. Serious athletes train to become proficient at the sport and that's what is important, proficiency. Proper running technique is something that must be learned and practiced. I'm not saying it's easy, but to claim that you are a runner just because you put on a "running" shoe and speed up your walking stride is an insult to every athlete who works to develop technique.

A simple recap here on a few of my finer points:
1. Proper running technique and the way the human body is designed to work is landing on the ball of the foot with it under your center of gravity.
2. Landing heel first is termed "Jogging"

3. Minimalist running is safe, but takes time to transition correctly. Even the study that spark all of this states: "Conclusions: Runners interested in transitioning to minimalist running shoes, such as Vibram FiveFingers should transition very slowly and gradually in order to avoid potential stress injury in the foot." This time frame will be different for each individual. It took me almost a year to be a strong minimalist runner.

I'm sure this angered quite a few people, but at the very least I hope this made people think. I also hope if you read this you took the time to look at the articles I linked to. As I stated above these are the opinions of specialists and leaders in their fields of study. These opinions are based on scientific studies. The evidence is there, do with it what you will, but you can't deny it. I'm always open for discussion on this or to help someone learn better technique.

I hope this sparked some interest in learning more about running technique, as well as making you think about the message that the media puts out to us. Now if I could only get people to stop telling me how running is going to ruin my knees...
Posted by Unknown at 05:14